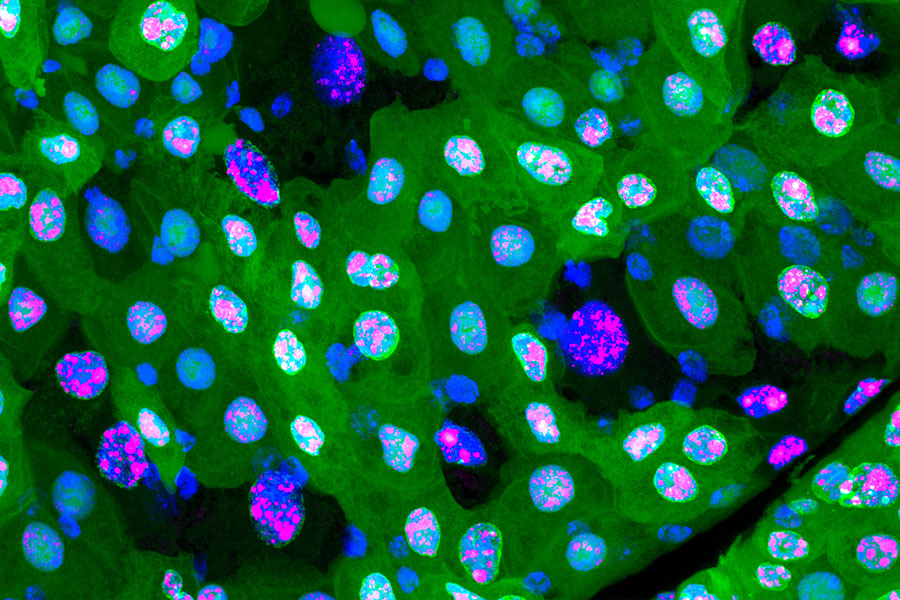 A joint research group led by Genki Kanda in the Lab for Biologically Inspired Computing has developed a robotic artificial intelligence (AI) system for autonomously determining the optimal conditions for growing replacement retina layers necessary for vision. The AI controlled a trial and error process spanning 200 million possible conditions that succeeded in improving cell culture recipes used in regenerative medicine. This achievement is just one example of how the automated design and execution of scientific experiments can increase the efficiency and speed of life science research in general. More

Many bacteria and single-cell algae ferry ions into and out of their cells using pumps that work by altering their shape when activated by light. Such light-driven pumps allow cells to regulate their contents relative to their environment and are not just of interest to biochemists; neuroscientists use them to probe brain circuits in animals by turning neurons on and off in response to light. Learning about how these pumps work will enable brain researchers to tailor them for this application. In a recent study, Mikako Shirouzu and Toshiaki Hosaka in the Lab for Protein Functional and Structural Biology, and their co-workers at the RIKEN SPring-8 Center used a powerful x-ray laser to visualize how the shape of a light-driven pump of chloride ions from a marine bacterium that is based on the light-sensitive proteins rhodopsin changes during operation. They discovered that the pump had an intriguing mechanism for preventing chloride ions from returning the way they came. More

There has been an explosion in awareness of the various critical roles that bacteria in our guts play in health and disease. Biologists want to explore how the make-up of the gut microbiota affects their hosts, but methods for classifying bacteria according to species provide only very rough results. Now, Jianshi Jin and Katsuyuki Shiroguchi in the Lab for Prediction of Cell Systems Dynamics and their co-workers have devised a truly single-cell method that can accurately and rapidly characterize communities consisting of hundreds of thousands of bacteria. They also demonstrated the power of their technique by using it to see how diets deficient in vitamin A affected the gut microbiota of mice, which revealed that only one species of gut bacteria was significantly affected. Their method holds the potential to assess the effects of recently developed bacterial therapies on the gut microbiome. More 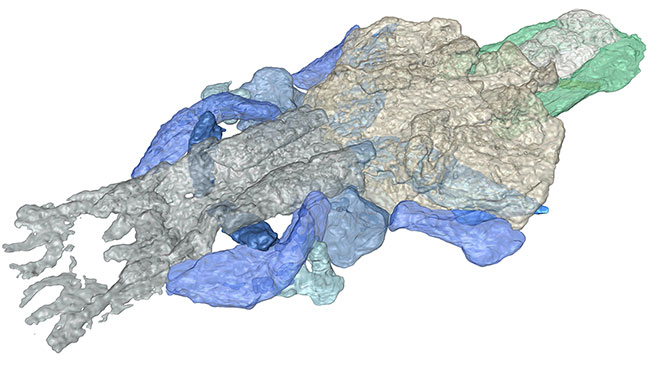 Palaeospondylus was a small fish-like vertebrate, about 5 cm long, which had an eel-like body and lived in the Devonian period about 390 million years ago. Although fossils are abundant, its small size and the poor quality of cranial reconstructions have made placing it on the evolutionary tree difficult ever since its discovery in 1890. It’s been thought to share features with both jawed and jawless fish and its body has presented evolutionary scientists as a mystery. To resolve some of these issues, Tatsuya Hirasawa and Shigeru Kuratani in the Lab for Evolutionary Morphology, and their collaborators used the extremely powerful RIKEN SPring-8 synchrotron radiation X-rays to generate high-resolution micro-CT scans. Unlike most studies that have used excavated fossil heads, the new study used carefully selected fossils in which the heads remained completely embedded in the rock. The team found evidence that the mysterious ancient fish-like vertebrate Palaeospondylus was likely one of the earliest ancestors of four-limbed animals, including humans. The study unmasks this strange animal from the deep past and sets its position on the evolutionary tree. More 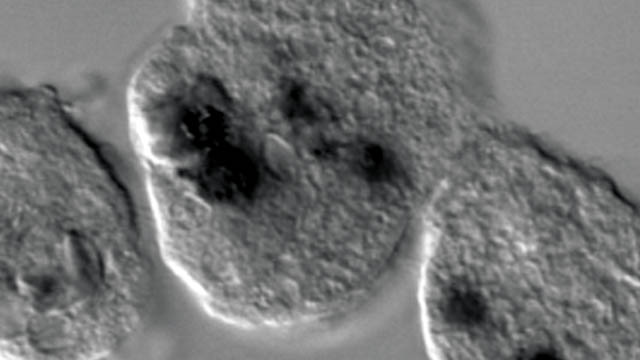 The parasitic amoeba Entamoeba histolytica infects about 50 million people a year, mostly in developing countries. It causes amebiasis, which has symptoms such as diarrhea, dysentery and colitis and is fatal in just over one in ten cases. Amebiasis is usually treated with the anti-protozoal metronidazole, but this drug is a potential carcinogen, and there have been several issues with its use during pregnancy and lactation. Since E. histolytica takes in a lot of iron ions, which are essential for maintaining the life activities of the amoeba, Akira Wada (Lab for Nonnatural Amino Acid Technology) and his collaborators investigated whether compounds that target iron ions could be used to combat the infection. They found that an iron-targeting polypyridine compound could curb the proliferation of the amoeba, and importantly, because it did not appear to affect human cells, it is not expected to have significant side effects. The team is now looking at ways to enhance their iron-targeting compound. More 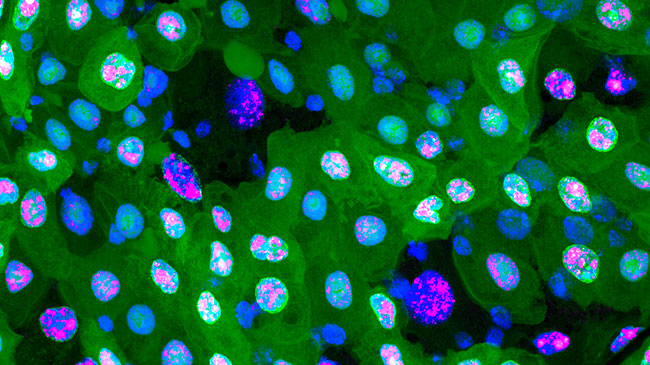 Death in darkness: a new type of cell death discovered in fly guts

Like the skin, cells that make up the intestines are constantly dying and being replaced by new cells. This process, called turnover, helps maintain the balance, or homeostasis, between tissue growth and tissue renewal. The conventional theory for turnover in the intestines is that aging or damaged cells die through a process called apoptosis. Also called “programmed cell death”, apoptosis is one of three types of cell death that are currently recognized. A research group led by Sa Kan Yoo (Lab for Homeodynamics) has discovered a completely unknown type of cell death that takes place in the guts of the common fruit fly that they tentatively named erebosis, based on the Greek ‘erebos’ meaning ‘darkness’, because the dying cells looked so dark under the microscope. The new process is thought to play a role in gut metabolism. The findings necessitate a revision of the conventional concept of cell death, and at the same time, overturn the previously established theory of tissue homeostasis in the gut. More

When eukaryotic cells experience stressors such as infection by viruses, oxidative stress or insufficient nutrients, they activate the integrated stress response (ISR)—a signaling network in cells that helps cells to remain healthy under challenging circumstances. The ISR dramatically reconfigures the physiology of cells, largely shutting down protein production while activating genes that help cells respond appropriately to stressful stimuli. On the other hand, in many neurodegenerative diseases, prolonged ISR in neurons contributes to neuronal cell death for reasons that are unclear. Takuhiro Ito and Kazuhiro Kashiwagi in the Lab for Translation Structural Biology and their colleagues have focused on the fact that certain viruses, like the sandfly Sicilian virus, can disrupt the host cell ISR by producing a protein called NSs. They generated a high-resolution structure of the NSs and host translation machinery complex using cryo-electron microscopy and elucidated the molecular mechanism for disrupting ISR. The team then confirmed that NSs can protect cultured rat and mouse neurons from damage or death resulting from chemically-induced stress. Their findings are expected to lead to clinical applications such as the development of treatments for neurodegenerative diseases in which ISR has been implicated in their pathogenesis. More

Signaling proteins known as G-protein-coupled receptors (GPCRs) are found in the membranes of cells, and they convert signals from outside a cell into responses within a cell. They are responsible for reacting to signals from hormones, neurotransmitters and sensory signals from the eyes, nose and mouth. The critical role they play in cell biology is highlighted by the fact that roughly half of all drugs on pharmacy shelves target GPCRs. There has been much research into how GPCRs activate their scaffolding partners, known as β-arrestins, by binding to them. For a long time, β-arrestins were thought to be activated only by the tail end of GPCRs. But now, using nuclear magnetic resonance spectroscopy, Ichio Shimada and Yutaro Shiraishi in the Lab for Dynamic Structure of Biomolecules and their collaborators discovered that β-arrestins bound to the tail of an interacting GPCR are only partially activated—subsequent binding with the core region is needed to push the β-arrestins into full activation mode. This finding highlights a path forward for therapeutically biasing the signaling activities of β-arrestins. More