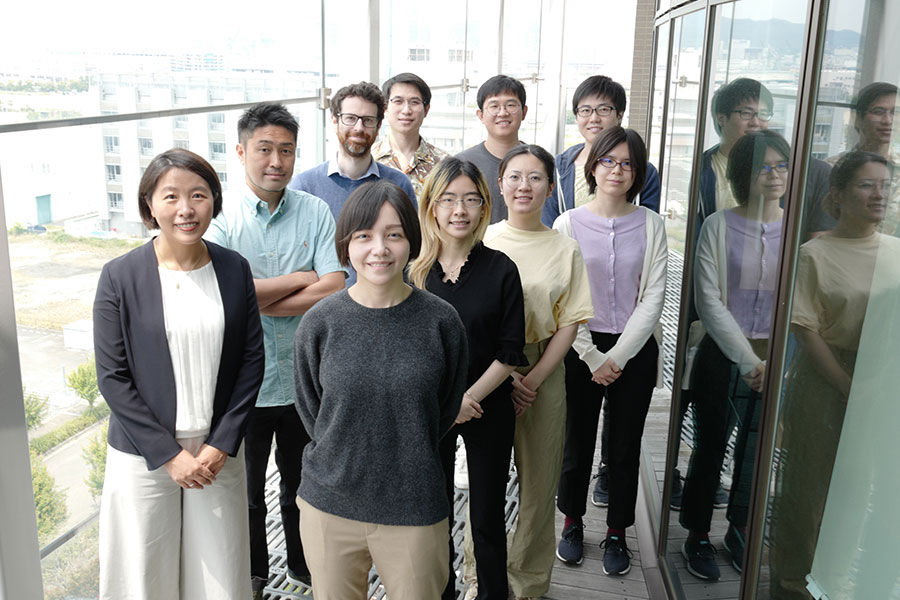 The Laboratory for Neuroepitranscriptomics was launched in April 2021 and is headed by Team Leader Dan Ohtan Wang (front row, left in photo). Originally from China, Dr. Wang first came to Japan as a high school student on a short-term exchange program, and then later returned to attend the Tokyo Institute of Technology for her undergraduate and master’s degrees in bioengineering and biosciences, respectively. She moved to the United States for her PhD studies at the University of Southern California, where she decided to pursue molecular and cellular neuroscience research. Following a post-doc at the University of California, Los Angeles, she returned to Japan to work at the former RIKEN Advanced Science Institute (ASI), where she began working on RNA imaging technologies for brain neural networks, specifically for understanding dynamics at neuronal synapses, which she continued to expand on in her following post as an assistant professor at the Institute for Integrated Cell-Material Sciences (iCeMS), Kyoto University. We sat down with Dr. Wang (or “Ohtan” to many of her colleagues) to hear about the Laboratory for Neuroepitranscriptomics.

What is the composition of your laboratory members like?

We have four research scientists, five PhD candidate students including two who are Junior Research Associates, one student trainee who is an undergraduate student, a team of assistants, and then me.

What are the main research themes of the laboratory?

The two keywords related to our research are the ‘’brain” and “RNA”. RNA is a molecule capable of storing genetic information like DNA as well as functioning like a protein enzyme. Over the past decade, chemical modifications to RNA, reminiscent of those seen on DNA to turn genes on or off (i.e. epigenetics), have emerged as a possible new layer of regulation of gene expression for fine tuning a wide range of biological functions including neural network formation, and this has spurred a new field called epitranscriptomics (or RNA epigenetics), the study of RNA modifications.

Our laboratory is focusing on a novel RNA neuroepigenetic mechanism associated with synapse function in the brain. Neural synapses in the brain are dynamic and undergo life stage-dependent changes in response to learning, memory, and other cognitive input. We are particularly interested in revealing the role and regulation of mRNA modifications occurring at neuronal synapses, as well as understanding how mRNA modifications may influence gene networks for experience-based behavioral changes and diseases over the lifespan of an organism. To address these topics, we are adopting a diverse range of approaches and technologies, including quantitative and omics technology, fluorescence imaging, cell and molecular biology and the use of genetic animal model systems.

What are some strengths of the laboratory?

We have been developing new experimental approaches to meet each of the objectives of our research. This has resulted in the development of the world’s first live-imaging method of RNA in a brain ex vivo to monitor RNA localization, the development of a highly sensitive method for the comprehensive analysis of RNA chemical modifications using the smallest amount of RNA reported to date as well as the development of a groundbreaking translation reporter-system in the synaptic region. We are currently in the process of developing a large-scale analytical method of the synaptic structure, which is the basic structural unit for computation within the brain; this would help tie together our understanding of synaptic function with behavioral output. We also have researchers with varied backgrounds in the laboratory from specialists in cell and molecular biology, electrophysiology, chemistry as well as psychology, which will allow us to tackle questions related to chemical modifications of RNA, their roles and regulatory mechanisms related to synapse formation spanning all biological scales from molecular and cellular levels through to individual levels, including looking at influences on behavior.

What are your long-term goals for your research?

As our particular interest lies in the neural synapses of the brain, we hope to reveal the regulatory mechanisms of RNA modifications in relation to synaptic functions, including synapse formation in response to environmental or experience-based input. Until recently, the structure, modifications, movements and translational dynamics of RNA molecules had been largely unexplored in molecular neurosciences because of their small numbers and the lack of tools available. By collaborating with many specialists in different fields working at BDR and adopting the various tools available here, we hope to be able to develop a methods that will enable us to achieve a comprehensive understanding of the dynamics and function of the RNA regulatory mechanism, eventually leading us to establish a new model for explaining environment-gene interactions in humans.

Did you experience any challenges with your research due to the Covid-19 pandemic?

We experienced multiple challenges, such as delays in arrival of students from abroad to Japan due to entry restrictions by the Japanese government, as well as looking after them during their self-isolation period immediately after their arrival. There is always of course the anxiety that our lab may be forced to immediately close in case someone comes down with the Covid infection. Being unable to network in person with researchers abroad was also very frustrating. On the other hand, the pandemic did also bring about rapid developments in online meeting tools, and with that provided some flexibility to spend more time with family because we do not need to go on as many business trips.