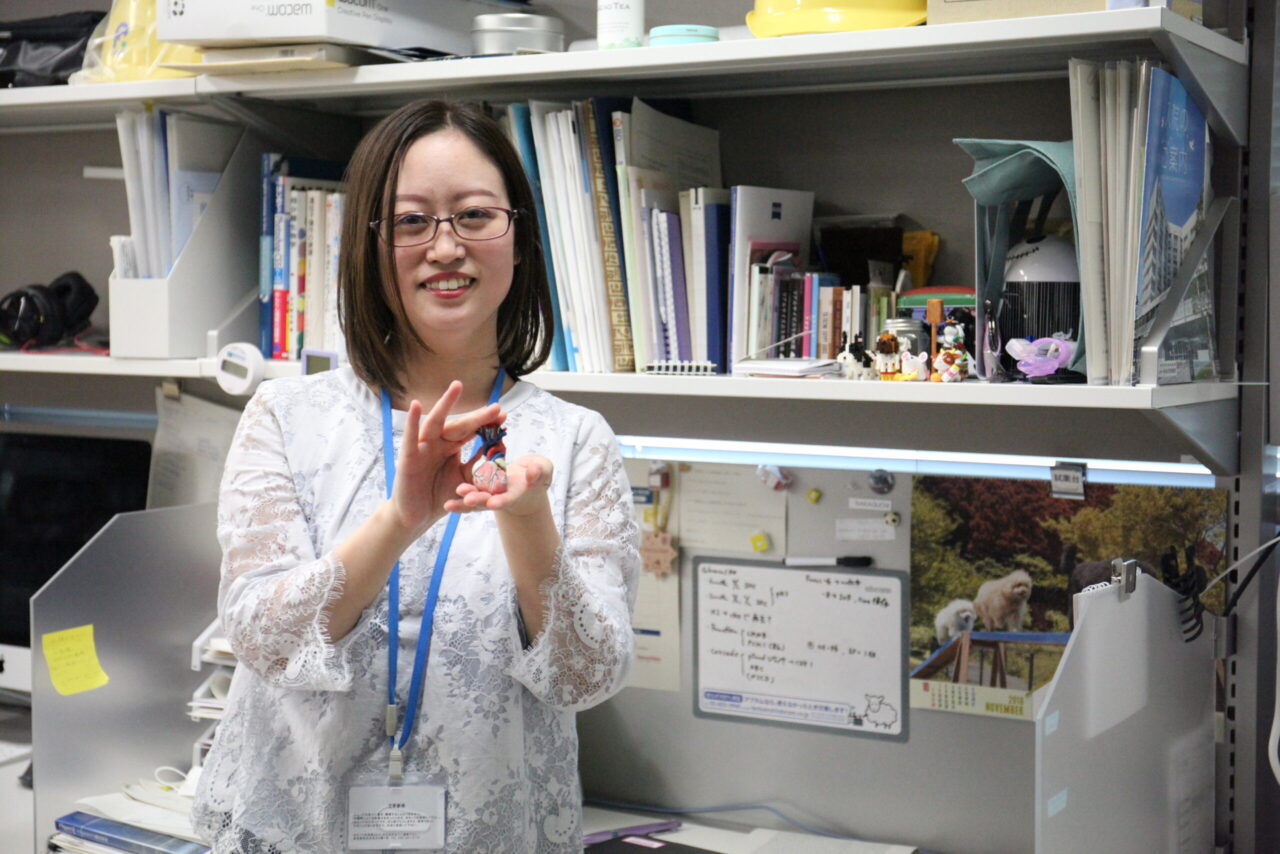 This time, we have Dr. Akane Sakaguchi from the Kimura Lab. I was surprised to learn that she makes decisions based on her intuition, which was different from what I expected judging from her neat appearance. I guess we could call her an intuitive person. She is doing research on the heart, and the way she made the decision to do so was also very intuitive. I really enjoyed listening to her talk.

Research Scientist in the Lab for Heart Regeneration.
After studying crystallized protein structures at the University of Hyogo and then heart development at the National Institute of Genetics, she joined RIKEN BDR in 2018 to carry out research on heart regeneration. She likes teas, perfumes, and cooking (but only side dishes that go well with alcoholic beverages).

Colleagues from the NIG

Your name was in the list of participants for the RIKEN BDR Retreat held in 2018.

Where were you before coming to RIKEN?

At the National Institute of Genetics (NIG). I received my Ph.D. in the lab of Dr. Yumiko Saga.

Oh, so the same lab as Dr. (Mitsuru) Morimoto?

Yes. I first met Dr. Morimoto when I was working towards my master’s degree in the lab.

There are a lot of people at RIKEN BDR who used to work at NIG, including Dr. Saga’s lab, aren’t there?

That’s right. There are probably at least seven people that I know of. At the time, if you wanted to do something working with mice, your options were limited.

Sure. By the way, where were you before that?

I was at the University of Hyogo.

I found out that some universities made admissions decisions based only on the results of the National Center Test (for university admissions) after taking this test, and decided to submit my application to the University because I could.

I have the impression that you are more logical.

Sometimes people ask me, “Why did you decide to do that?” or tell me, “I’ve never thought of that.”

Can you give me an example?

The goal of the laboratory I am working in now is heart regeneration, so we are looking for genes and substances that have some regenerative effects in the heart. I can’t tell you all about it because I haven’t been able to put it together in a paper, but there was one instance when I decided to try administering a certain substance on a whim…

Mammalian cardiomyocytes have the ability to proliferate before birth, and then the cells gradually lose this ability after birth. In humans, cardiomyocytes stop proliferating about one month after birth. It is thought that this occurs due to changes in the metabolic pathways. So, I tried treating the cardiac cells with a reagent that is commonly found in any laboratory. When I did this, I observed that the cardiomyocytes maintained their proliferative capacity, and this led to the start of one project.

What did your lab head, Dr. Wataru Kimura, say?

He just said, “I never thought of that.”

Hahaha (laughing). I guess from Dr. Kimura’s view, it was something he had never even thought to consider. But I think this kind of flexible mindset is important.

There was another time when we had a reagent that is known to regulate the cell cycle, and I decided to try administering this as well.

Yet another instance (laughing).

We have to generate myocardial infarction model mice by performing LAD ligation surgery. We had just received approval from the Institutional Animal Care and Use Committee for our project to practice the surgical procedure, and I thought it would be a shame not to do try anything afterward. I didn’t need to do anything more than confirm that the procedure went well, but since I had the chance, I wondered what would happen if I tried administering the drug… There were several other candidate substances that I had submitted applications for, but we decided to try administering a well-stocked reagent in our lab. This led us to discover the regeneration of the injured heart, and this also led to another project that was later published as a paper. 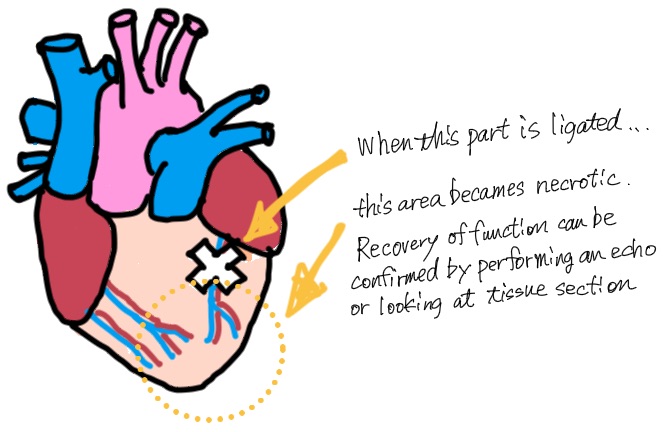 Pulling out a heart from her pocket… !

This is the area that we do the surgery (suddenly revealing a plastic model of a heart).

I see… Wait. Where did that model come from?

I had it in my pocket. It’s handy for explaining things.

I understand that, but you surprised me because it just appeared almost like magic.

This is a capsule toy, and I think there are other organs as well. The company making them makes anatomical models, so the toys are quite accurately designed.

I can see that.

And it only costs around five hundred yen.

Yes, it’s not just the heart, but when you are listening to an explanation about any organ, if you don’t know what the organ look like to begin with it can be difficult to try to visualize in your mind.

That’s why this toy is useful, and I have it sitting on the shelf of my desk.

I see what you mean.

But the heart easily rolls over, so I place it between two dogs built of LEGO bricks.

The arteries are red and the veins are blue, and if you ligate this left anterior descending artery with a thread, areas beyond this point are not supplied with blood and oxygen and will become necrotic. All the cells in the ventricular wall beyond this point will die. After measuring cardiac function using echocardiography (or echo), we take a sample and make cross-sectional slices to prepare tissue sections. In the tissue section, you can see two holes, which are the left ventricle and the right ventricle. If you look at the muscle layer around those holes, because the cardiomyocytes cannot proliferate, the necrotic areas are thin and flimsy. The necrotic and flimsy areas have reduced cardiac function with weaker contractility, so we can measure cardiac function using echo waveforms.

And the echo is done by the team leader, Dr. Kimura.

That’s right. We perform echoes once a week, but it has to be a blind test. If the person performing the surgery or other experiments and the person performing the echoes are the same, they will know what kind of treatment has been performed on the mouse, so their hopes for a certain result may unknowingly come into play. If this happens, it is possible that the person will unconsciously take a picture of the area with the least amount of damage when conducting the echo. We need to avoid this.

For example, if you do an echo above the area where the surgery was performed, of course, the cardiomyocytes there are all healthy, so the waveform of the heart contraction is beautiful and the cardiac function comes out well. But if you know what the experiment (or hypothesis) is about, you will unconsciously want to take picture there, so you need to separate the person who did the experiment from the person who took the echo. It’s absolutely essential that the person performing the echo does not know what experiment was done. In addition, Dr. Kimura was the only person with the right skills.

What do you mean?

The supplier of that echo instrument taught us how to use it and where to aim the ultrasound, but I was never able to master it…

Is it that difficult?

It is difficult to find the right angle to apply the echo device. When you do an operation, the heart is tied up with a thread, and this thread can adhere to the ribs and lungs, resulting in the heart being positioned in an abnormal direction. For example, if the heart positioning is tilted, you can’t take a good picture of it at a normal angle. That’s where experience comes into play, so I ask Dr. Kimura to help me.

I can see how that requires some skill.

How long do you carry out observations for?

It’s usually anywhere from a few months to six months. I, myself, originally did experiments in embryology which spanned about seven days, so I’ve gotten much more patient (laughing).

In a model of myocardial infarction, the necrotic area becomes thin and flimsy. However, if we administer a certain substance, this area will begin to regenerate (through the proliferation of cardiomyocytes), and the cardiac function will improve.

So you are observing this using the echo, right? 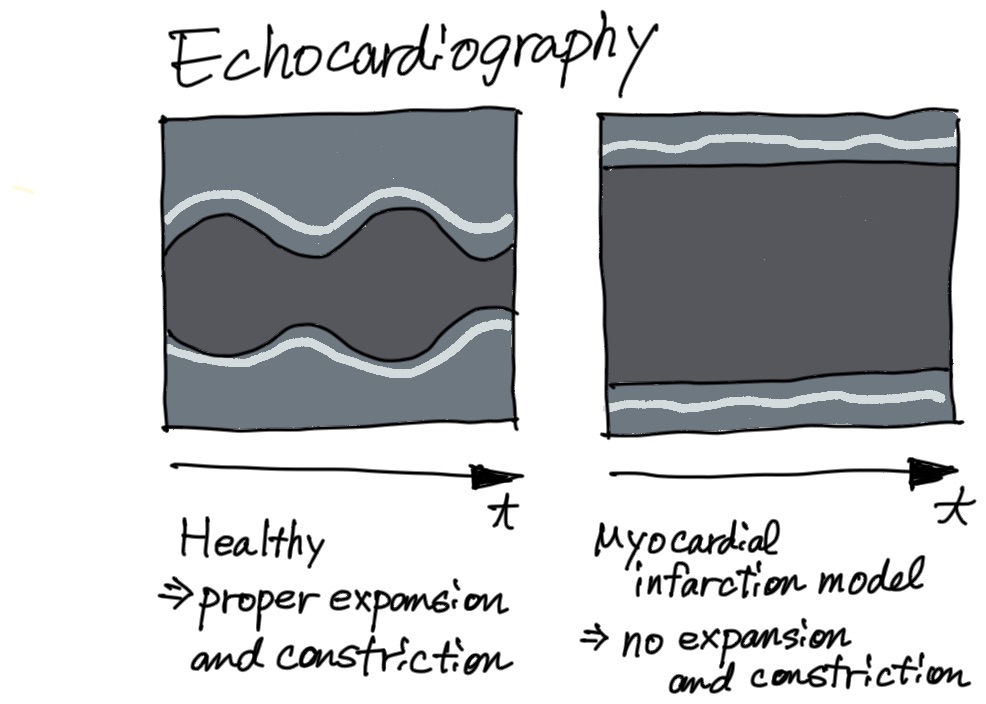 By measuring the thickness of the myocardium and the differences between diastole and systole, we can evaluate how well it is recovering. If the echo device is not positioned properly, then the echo image will not be taken correctly.

Wow, that makes a big difference.

Yes. The heart of a mouse is no more than two centimeters in size, so the data changes depending on subtle differences in how the echo device is applied. Therefore, it’s very important to know where and at what angle to apply the echo device, and eliminate arbitrary factors. In addition, it is also very important to know what part of a particular echo image to quantify.

We take several datasets from the same individual, but the data changes depending on how it was taken, so it’s the person doing the analysis who decides what part of the data will be used. Here, too, it is necessary to decide which points to analyze so that we are obtaining the data properly. Therefore, if you are influenced by your hypothesis about what results would be desirable, you will end up with skewed data.

I see. That’s why it’s best to have separate people doing the surgery, echo, and analysis.
That’s right.

As her heart desires

So, why did you decide to study the heart in the first place?

The University of Hyogo has a strong program for analyzing crystallized protein structures, and we had classes with exercises involving culturing cells. We had to choose an organ that we wanted to culture cells from. I chose the heart mainly because it was beating. When you culture cardiac cells, you get clumps of cells called colonies forming and those colonies are beating. Among the colonies, some are small and beating independently, some are large colonies with several concentric areas beating in concert, and some are large colonies beating in separately toward each center. Seeing that was really interesting. I think we also cultured cells from the liver, which was attached to the heart when it was removed, and the thigh muscle, which was easy to remove because it was large, but I don’t remember those results at all. I think the heart left a big impression on me.

So, I was looking for a laboratory in the Kanto region, which close to my parents’ home, where I could do heart research. And this led me to Dr. Saga at the NIG. I met her for the first time at a graduate school information session at The University of Tokyo. After talking to her, I knew I liked her and contacted her about working in the lab without really looking into the details of her research.

As I am telling you this, I am realizing that it quite a muddled decision even for me (laughing).

Whatever it may be, I have a feeling that you’re living your life following your heart (laughing). 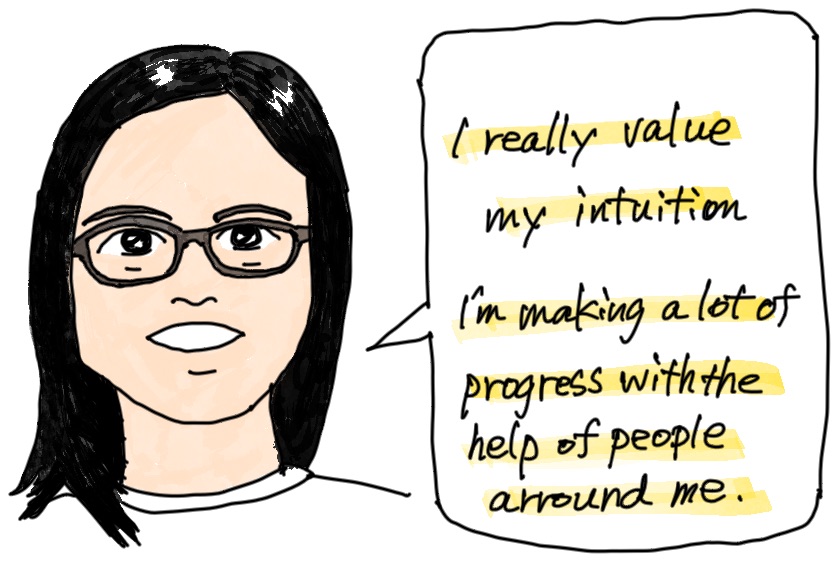 I really admired how she trusted her instincts to at least give something a try, where other people would over think things. It’s not uncommon as adults to ponder this and that, and in the end not doing anything. The fact that she actually managed to collect data afterward is impressive.

Business developer based in Kobe and a RIKEN alumni. He has a broad background in areas such as analytical chemistry, optics, biotechnology and IT. He is involved in a wide range of activities to assist in commercializing technologies and ideas born from academia, including setting up opportunities for idea-sharing, finding investors, and strategic planning