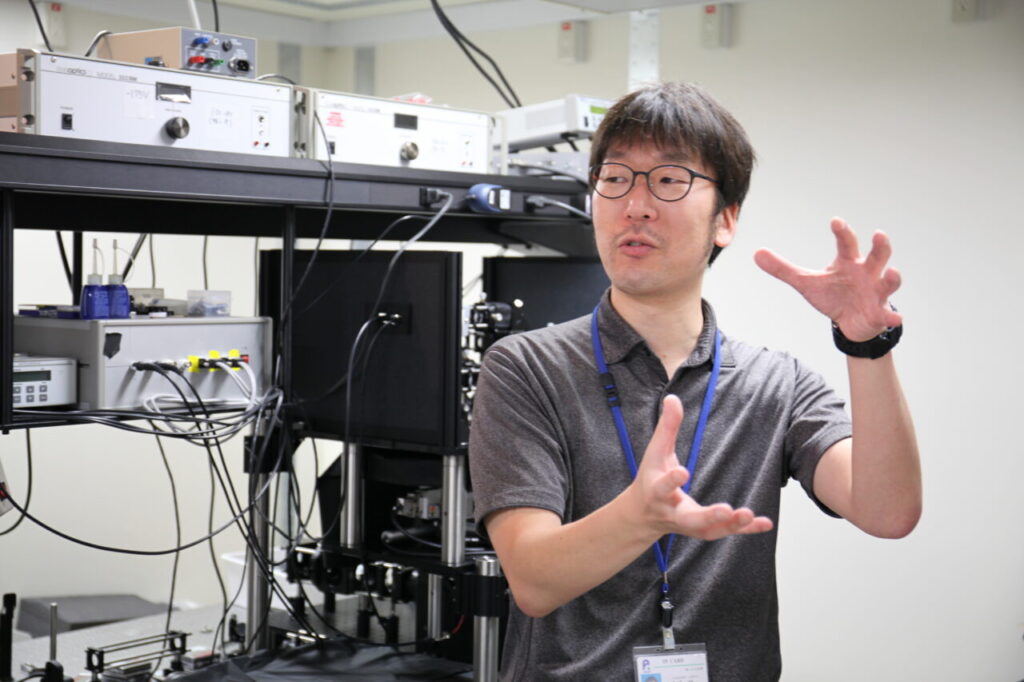 This interview took place in Dr. Kaneshiro’s lab. I was greeted by the sight of bare lasers and a lot of lenses. I could already sense that this was going to be a different interview than the previous ones…

Technical Scientist in the Laboratory for Comprehensive Bioimaging.
He majored in solid state physics at Waseda University. Yearning to break new ground, he moved to RIKEN after finishing his thesis. He currently is developing an instrument dedicated for observing cell division and differentiation inside a mouse embryo. His hobbies include gaming, castles, and watching movies.

Wow, this looks cool. What is this? 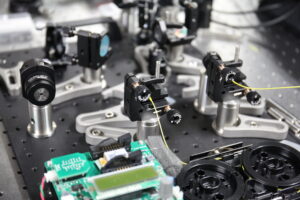 You can actually build a laser?

Of course. Lasers were developed by humans after all. If you take the outer cover off of commercial lasers, they will look like something similar to this.
It’s like resonator, with the incident light (i.e. light that hits a surface) being amplified through its reflection between these mirrors. Be careful, it’s dangerous to touch. This is not mine, by the way.

Oh. (Oops! I thought this was his.) Which one is your work, then?

This microscope here. It is built based on the theory of Second Harmonic Generation.

(He has already lost me…) 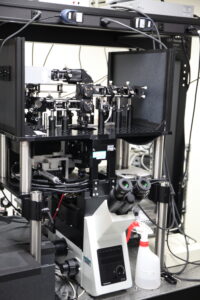 Light waves that come out (of the microscope) are doubled in frequency, hence it’s called “second harmonic generation” or SHG for short.

Why is it doubled?

It’s generated from the interaction between light and material. Although it is not precisely the same, one analogy might be sound waves, and imagine a higher octave tone coming out. Only certain materials can generate this SHG. Examples of biological materials that can generate SHG include cytoskeleton, microtubule, actin, myosin, collagen and muscle in organisms, or cellulose and fibers in plants. Crystallized proteins can also generate SHG.

What about kidney stones?

Hahaha, probably.
If they are materials that can generate SHG, we can observe them in a label-free manner.

So, do you mean that those materials can be observed without the use of any labeling technique? Is it possible to distinguish between myosin and collagen, for example?

SHG light reflects the structure of materials. To make a long story short, SHG is polarized light. If you change the angle of polarization of the incident light and place an analyzer (another polarizer) on the detecting side, you will see that the intensity of observed light will vary depending on the specimen structure. We can repeat this for each molecule, which will allow us to distinguish the different molecules.

When you rotate the polarizer, it produces a beautiful sine curve, and this pattern will vary depending on the molecule or structure.

It takes a long time…

This is a neuron with its axon and dendrites, and the other image shows the spindles and other structures that appear during cell division. This is showing three stages of cell division—the beginning, middle and late stages. We can observe similar structures inside a cell. 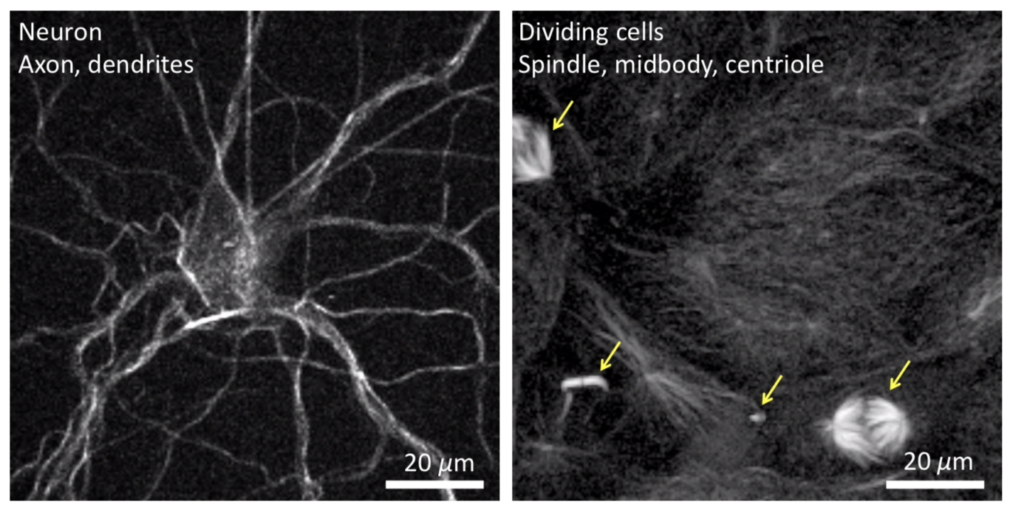 This figure shows single microtubules that were extracted from a cell and observed in a label-free manner.

Label-free? That’s quite an achievement, isn’t it?

We observed two patterns of polarization dependency, indicating that microtubules have two different structures. This is an old work of mine—it took six years to publish.

It does take time indeed.

It was quite a tough job. In particular, it was difficult to try observing a single microtubule with SHG.

What were the most difficult points?

First, we cannot amplify the signal since we are not using any labelling techniques. After close examination, we determined that the glass slide used to place the microtubules on produced some background noise. So we stopped using ordinary glass.

Yes. Ordinary glass contains some impurities, probably to adjust its refractive index. We decided to use quartz glass, which produces less noise and allowed us to obtain this image.

I don’t understand what this formula is trying to illustrate. 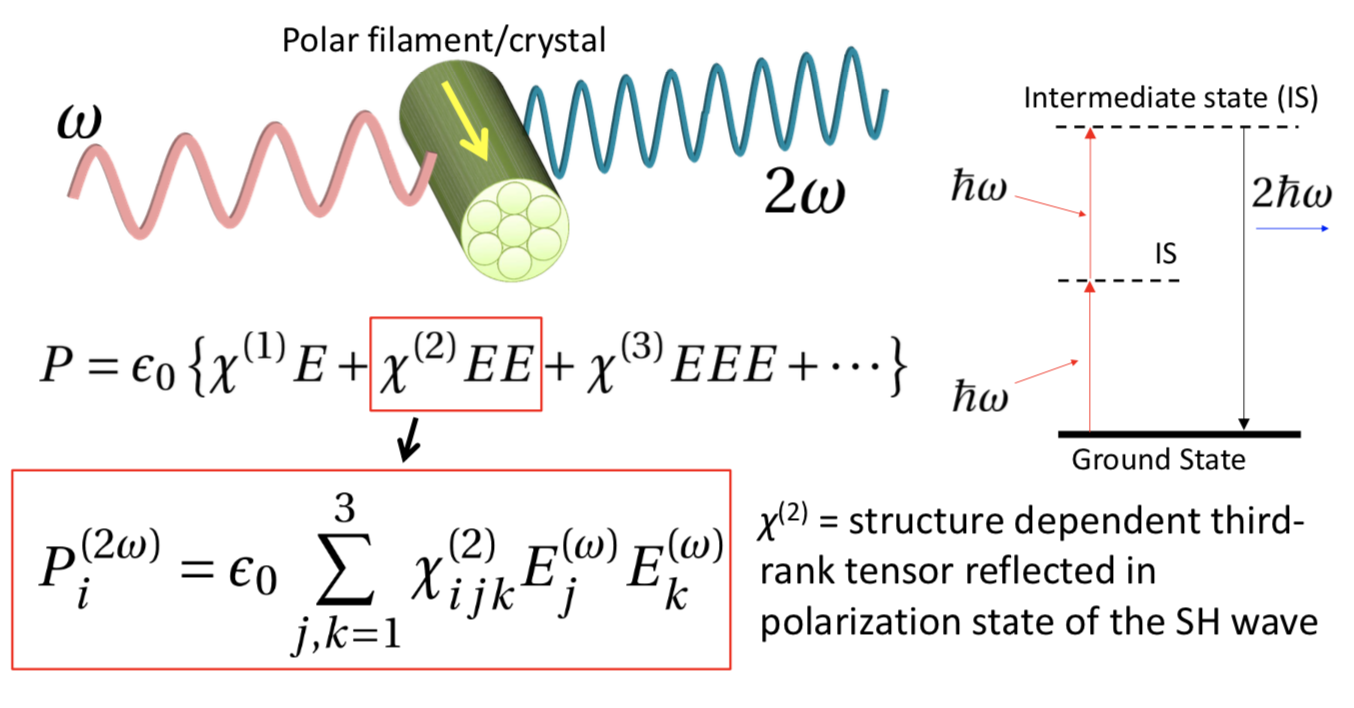 χ (kai) represents SHG characteristics and E represents the electric field. This is nonlinear optics. This formula says that when two photons combine into one, it results in energy being doubled and in turn the light wavelength being halved.

There has been more progress made recently, and we now know that if you narrow the field of observation, we can even track time-dependent structural changes.

Is that possible even in a living cell?

Yes, it is. The recent trend is what’s called “all-optical.” It’s a movement in which scientists are trying to do everything by using optical techniques. Optics have many advantages; for example, we can observe the inside of a cell without having to dissect it.

It’s good that no labelling techniques are needed with SHG.

That’s right. Our lab has been discussing how this technology can be further applied to biology.
In fact, when we talk to biologists, we receive a lot of interest on our work. We have also worked with them to test different samples.

Specialists get together to create new science

What are you going to develop next using SHG?

Oh, I am working on something different right now.

Ah, that’s why you are developing a lightsheet microscope!

Yes. It will be a microscope used specifically for observing early-stage mouse embryos.
One of the important aspects of this project is that we are working with a team of specialists in other fields. For example, I don’t know much about biology, but I can build microscopes, and vice versa. It is also not easy to obtain a clear image just by taking a picture with a microscope.

Since it is difficult to obtain a perfect, clear image using only a microscope, we need to modify the shooting techniques and deconvolve the obtained images. If we are unable to do this, then it will be quite difficult to track all cells simultaneously. This is the reason why many informatics researchers are included as authors on recent papers related to imaging technology.

It is great that you are able to combine the strengths of different experts to make advancements.

It is becoming more and more difficult to do research solely on your own or within one lab.
This type of project was probably not very commonly seen in the past. But, our current project and team is going well so far.

I’m looking forward to seeing something you publish in the future. Thank you very much. 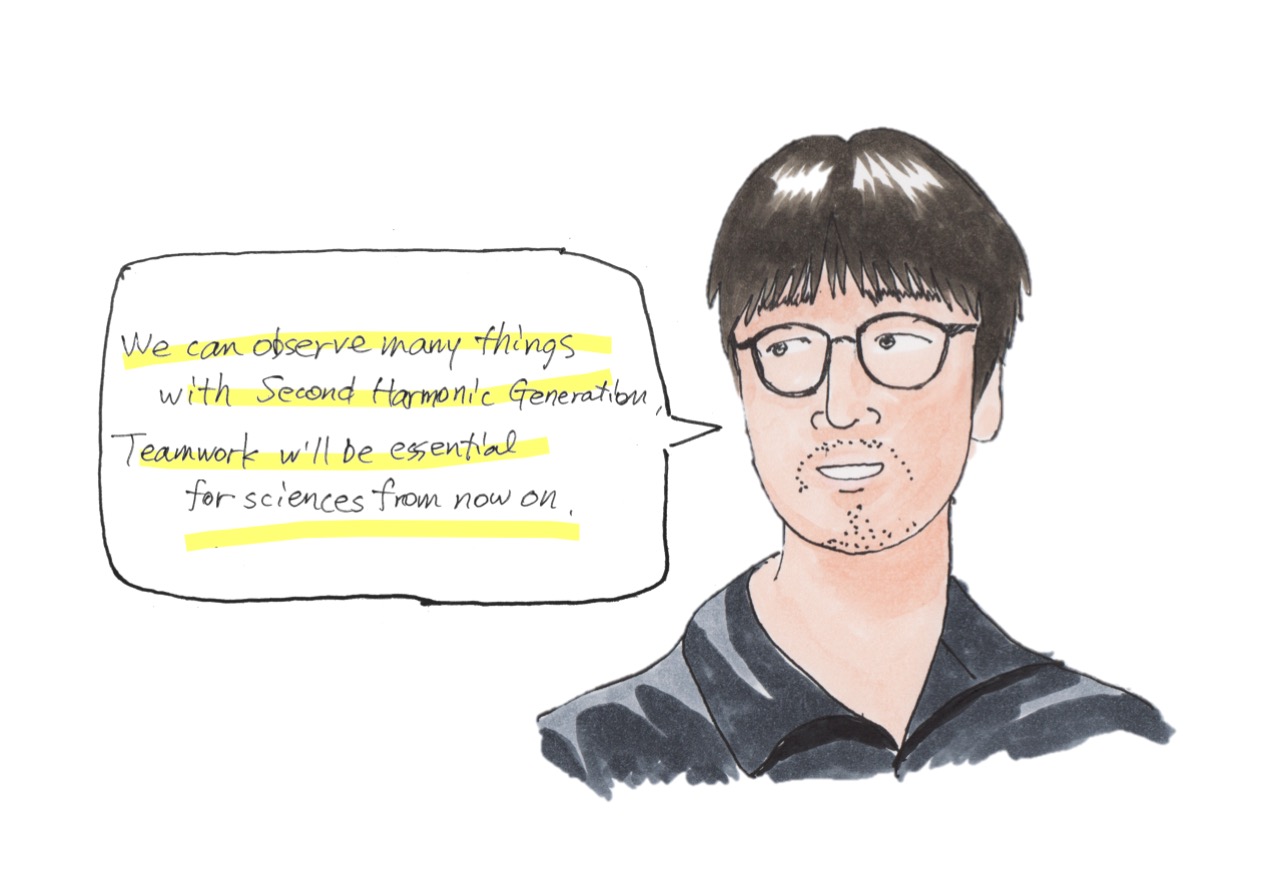 There was a time when I myself fiddled around with lenses and mirrors, so listening to his research brought a sense of nostalgia over me. But, as I never mastered the craft enough to build a lightsheet microscope, I was filled with a renewed sense of respect for the work scientists do. I also learned that this work does not easily lead to publications, and that there are new trends in this field. 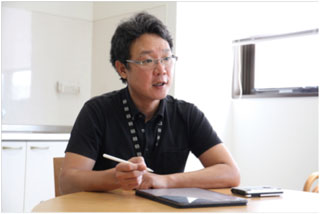